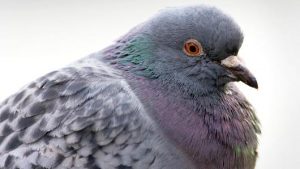 In the full-page feature, the article described how a reporter accompanied pigeon association members in the West District to Beijing’s Yuetan Sports Center at 8 p.m. the evening before the ceremony.

Members examined the wings, tails, anuses and legs of each pigeon for “suspicious objects” and video recorded the process, the report said. Four trucks then took the birds about 4 miles east to Tiananmen Square at 25 mph to prevent carsickness.

Representing peace, the birds were released at Tiananmen Square during the flag rising at sunrise on Wednesday in honor of China’s National Day, which celebrates the founding of the People’s Republic of China on October 1, 1949.

As carrier pigeons, the birds return to their owners in about 10 minutes, one member told the Beijing Times.

In 2013, Chinese state media also reported that 60,000 carrier pigeons were injected with a vaccine as a precaution against the H7N9 bird flu virus. I recently took in a sick pigeon and had it wormed (or de-wormed) by our local bird rescue centre.  The resultant pile of dead roundworm on the cage floor within 12 hours was disgusting – no wonder this poor bird had been showing signs of illness.  These parasites had been absorbing all the available nutrients from the pigeon’s food intake for goodness knows how long!

This reminded me of many years ago when I took pity on three cockatiels in a pet shop who for weeks I saw squashed together in a cage the size of a shoe box!  I bought them and eventually found them a wonderful new home together in a large aviary.

Back to worms though… I had these three cockatiels for a couple of weeks before rehousing them and noticed that one out of the three was less active, slightly grumpy and fluffed up and ate lots more than the other two cockatiels, and also strained a little when passing droppings.

Wormed him, and within 24 hours this poor bird had passed 35 roundworm!!!!  Needless to say he perked up very quickly.

We feed the local pigeons and doves every day at our reserve.  For about 6 months we’ve had two magpies hanging around.  Meat eaters they are and I continually worry about their intentions.

Winter’s upon us and the magpies are of course hungrier than normal as they are eating some of the pigeon pellets in our seed mix, and ….

They are flying in at the pigeons, chasing some directly, and when they can they grab hold of a pigeon by its tail, feathers flying, and luckily so far the pigeons have been fast and strong enough to escape.

Horror of horrors last week though when from a distance we witnessed the two magpies chase a baby pigeon, bring it to the ground and one on either side of the pigeon, wing in each beak…. You can imagine the intention!  We rushed at them and thank goodness we scared them enough to release the baby bird.

Consequently we now have a bag of small sticks beside us that we launch at the magpies when they come near us at feeding time!