Nigel, who lived in Torrance, California with his British owner, Darren Chick, flew away one day in 2010, and was gone so long he was given up for lost.

But, in a case of mistaken identity, Nigel was returned to another pet owner, who was also looking for their African grey parrot, and was able to pass him on to Chick. However, during his long absence, Nigel had forgotten all about his British roots – and started speaking Spanish.

Rather than swapping pleasantries in English, the bird now fires off a ‘¿Que pasa?’ to passing humans, the Daily Breeze reported.

After Nigel went missing, he lived in the wild – presumably around Torrance – until he was found a few months ago by a local business owner, Julissa Sperling.

After hearing Nigel making noise outside her house, she took him in and searched for potential owners. Instead of his actual owner, she found an ad put out by Teresa Micco, a local vet.

When the mistake emerged, Micco noticed that Nigel had a microchip, and used it to find Chick and reunite the two.

Sperling, a Panamanian who speaks Spanish, said Nigel might have picked up some of her phrases while waiting in the shop.

She said: ‘He was the happiest bird. He was singing and talking without control. He was barking like the dogs. I’m from Panama and he was saying, “What happened?” in Spanish.’

However, when Sperling handed Nigel over to Teresa Micco, a local vet, she realized he wasn’t the right bird.

Micco had been searching for her own African grey parrot, Benjamin, who flew away this February.

But Micco was able to track down Chick with information from Nigel’s microchip, and brought him home shortly after taking him in.

She said: ‘I introduced myself and said, “Have you lost a bird?” He initially said no. But he thought I meant recently.’

When she verified Chick’s name and said she had his African grey parrot, ‘He looked at me like I was crazy.’

Chick says last week’s reunion brought tears of joy to his eyes – despite the fact that Nigel bit him when he first tried to pick him up.

He said: ‘He’s doing perfect. It’s really weird. I knew it was him from the minute I saw him.

Nigel is the fifth parrot guided home by Micco, who has been running ads for her own missing bird for nine months.

Article By Kieran Corcoran for MailOnline and Associated Press 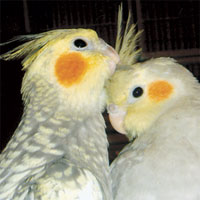 can apply to most pet birds and parrots (source: LTB Cockatiel e-book)

Sad Times
The death of one of a pair of cockatiels is good reason for concern on your part. Your remaining cockatiel will mourn the loss of its companion and you will need to give your bird the extra attention it needs to help it through this time. You will also need to monitor your cockatiel closely to check that it stays healthy – monitor its eating, drinking, sleeping and the droppings.

All cockatiels react differently to this situation so there are no hard and fast rules. The amount of time the two birds were together and whether or not they had bred and successfully reared chicks does impact on the situation.

Some cockatiels do fret terribly with the loss of their companion yet others come round fairly quickly.  They do go through a slight depression and you’ll have to be careful that the loss of its friend doesn’t turn your cockatiel into a screamer.

Do not consider obtaining another cockatiel, especially not in the early stages.  Introducing a new cockatiel at this time normally does more harm than good.  Watch your bird closely and see how it gets along in the next few weeks.

I know of someone who had a male cockatiel die, leaving behind his female companion of ten years.  The female cockatiel cried for a while and turned to its owner for more attention than usual.  The male cockatiel wasn’t replaced, and the female coped just fine, taking a week or two to adjust to the situation.  These two cockatiels, however, did live in separate cages side-by-side and had never bred.

Barrabands are also known as superb parrots. I describe them as medium sized parakeets or small parrots. They are slightly bigger than cockatiels.

These birds have beautiful colours and can be found in the wild in New South Wales and Northern Victoria in Australia.

Female Barrabands: Slightly duller green than the male with almost a blue-grey tinge. Small red patch on the throat, yellow-orange socks, underside of the tail is a beautiful yellow-orange-pink. 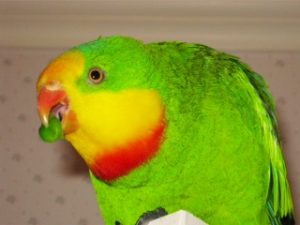