Conservationists are puzzled at a freaky phenomenon blamed on this winter’s monster storms.

A bird rescue centre is caring for six giant petrels after concerned members of the public found the birds in distress.

New Zealand Bird Rescue’s Lyn MacDonald said in 27 years working at the shelter, she’d never had more than one giant petrel at a time. In fact, she rarely saw more than one a year. Each of the six birds now at the shelter arrived separately over the past few weeks.

(One of the giant petrels which have been rescued by New Zealand Bird Rescue over recent weeks. Photo / Renee Henderson-Vousden)

MacDonald believed the most rational explanation lay with wild storms of the last few weeks causing the birds to be blown off course. Yet there were plenty of similar storms over the last quarter-century, and no subsequent increase in wounded petrel sightings.

Initial blood tests indicated some of the birds suffered from internal bleeding.

MacDonald’s colleague Renee Henderson-Vousden also met the birds at the Green Bay rescue centre. “They’re amazing to be around,” she said. “Up close they’re really large.”

Giant Petrels have some unflattering nicknames – stinker, stinkpot and sea vulture – but Henderson-Vousden said they didn’t smell at all and were delightful company, as well as being majestic.

Henderson-Vousden said the big birds, all young adults, were moderately territorial but not fighting.

All were members of the northern giant petrel species, distinctive for their pinkish tips on their bills. They were all expected to fully recover, even though one was virtually dead on arrival a few weeks ago, MacDonald said.

According to birdlife.org, nearby populations included 230 breeding pairs on Antipodes Island, another 230 on Campbell Island, and 50 pairs on the Auckland Islands.

In the 1990s, thousands were believed to have been killed in longline fisheries for Patagonian toothfish. The species has since recovered and its numbers are thought to be increasing.

In March 2012, the Department of Conservation was amazed after a juvenile northern giant petrel landed near Wellington after it was thought to have “hitched” a 500km ride with string winds from its home in the Chatham Islands.

MacDonald said petrels were quiet, placid birds and had no fear of humans because in their natural habitat they rarely encountered people.

The Rescue Centre has been monitoring the birds and feeding them. It planned to release the petrels back into the wild soon. People who wish to donate to the birds’ rehabilitation can do so at http://www.givealittle.co.nz/org/birdrescue

Article by:  John Weekes Reporter for the Herald on Sunday. 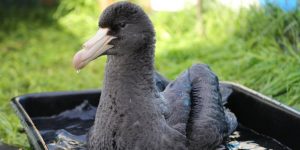 Feeding time for the wild birds in our backyard twice a day and so many birds visiting in these colder winter months.

Water dishes still available although not much bathing going on!